May 2021: Mark Harman with The Rattlesnakes Live in Moscow is digitally released.

January 2021:  We have acquired some of the back catalouge belonging to Mark Harman. These recordings will appear in the next few months.

April 2020: 'Rockabilly Guy' used in 'Gordon, Gino and Fred American Road Trip' (ITV) and Tim Polecat's version of 'The Boys are Back in Town' used in 'The Great British Sewing Bee' (BBC).

December 2019: 'Blue Egypt' by The Pharoahs used in an episode of 'Come Dine With Me' on Channel 4

June 2019: We are pleased to be involved with a Gucci advert. The song is 'Dia De Los Muertos'.

October 2018: 'Dia de los muertos' by Bill Fadden is to be featured in a Gucci TV ad in the USA. Nervous has sub-publishing rights for this song.

September 2018: Our research into the obscure Star-Light record label of Wisconsin that we are administering has turned up a really great jiver - 'Busy signal'. Listen to it on our YouTube site.

July 2018: The Gene Crazed vinyl EP has been released in Japan. It's a limited edition (VERY limited) of 100 copies so it will be super-rare in the future. Track down your copy NOWWWW!!!!!

May 2018: Two of Restless's most popular tracks from their classic debut album, 'Why don't you just rock' have been licensed to Fury Records for a limited edition vinyl 45. The tracks are 'Ice cold' and 'Long black shiny car'. Available now from Fury Rdecords.

March 2018: Mark Harman's song 'The Pendolino Special' will be in a film about post-war London gangsters called 'Once Upon A Time In London', a sort of 'tribute' to Billy Hill and Jack Spot et al... plus... we've licensed four tracks by Gene Crazed for a limited edition vinyl EP in Japan.

February 2018: The new Gene Crazed album ("It") will be available on all major digital platforms as of the end of March. More guitar slashing and foot stomping psychobilly.....

January 2018: We've picked up the rights to the new single by The Hustlers. It's called 'Rollercoaster' and it's a magnificent slab of neo-rockabilly. Available on all major digital platforms by the end of February. 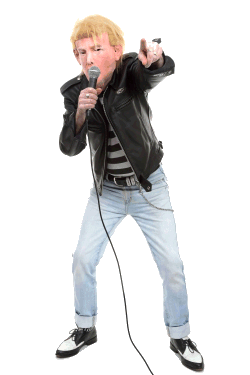 October 2017: What's the connection between Donald Trump and Nervous? Check out our YouTube website - The Rockamanics with 'Make rock'n'roll great again', along with a great cover of the Mischief song, 'In dreams', both of which will be on Spotify and Itunes, etc., by mid November.

September 2017: The Megatones have covered 'I'm a teddy boy' which was originally by Vernon and The GIs.

August 2017: We've also managed to get Mystery Gang's 'My baby's got an automobile' in this hotrod film which is simply called 'Rocket' and features some great old dirt track racing cars.

April 2017: We're releasing 19 more tracks from Pink Kadillac. These are their early demos. Expect to find them on all major digital platforms by mid-May.

February 2017: We've done a deal with The Ellen Kay band from Sweden for their new single. It's titled 'Release me' b/w 'I want him more' and it will be on all major digital platforms early in March.