World War 11 brought about many sociological changes in Britain. A lot of the old barriers began to fall, and when it actually ended, there was an air of optimism. Unfortunately, the country was in a bad way, and all sorts of things were rationed, including many types of food (I well remember when bananas arrived - what a joy!), sweets (candy) and clothing.
Of course, these shortages inevitably led to black marketeering. A lot of servicemen were 'demobilised', and this all led to the rise of 'The Spiv'. This was the kind of person who could lay his hand on anything. During the war, this was the man who sold your girlfriend her silk stockings! Like all people of his ilk, the spiv would advertise his 'abilities' by sporting the latest fashions, no matter how hard they were to get.
In times of shortage, the items in short supply become fashionable, and in times of plenty, the reverse is true. In our own time, where food is plentiful, a slim figure is deemed desirable - you get the point. In a society where material for clothing is in short supply, then a style that flouts material wastefully will be fashionable, and so it was after the war, when Dior created the 'New Look'. It scandalised the puritans in society because of its wastefulness. For the men, Savile Row in London was where all high class suits were made, and in response to the New Look, Savile Row brought in the 'Edwardian Look'. This was a throwback to the stylings as worn by men in Edwardian times. This, too, was wasteful of material, with cuffs on jacket sleeves and extra length on the jackets, too.
Although the Edwardian style was meant for the 'upper crust', it was seized upon by the Spivs and 'Flymen', who merged it with the new American 'Drape' style of jacket. The drape was so named because the jacket hung from the shoulders, and was not 'cut in' at the waist. Coupled with the rather risqué 'drainpipe' or 'stovepipe' trousers, this led to a whole new style in the late Forties. Enter the teenager....
Suddenly, there was a generation of kids leaving school who had money to spend, and because of National Service (two years in the Army from 18 - 20), they saw no purpose in taking on poorly paid apprenticeships when they would learn a trade in the Army anyway. These kids

were well educated, had money to spend, and they took on the new clothing style and cranked it up a level, with velvet trimmings on the jacket collars, cuffs and pockets, shiny 'horseshoe' style waistcoats, and ever narrower drainpipe trousers. Coupled with the crêpe soled shoe which had become popular during the blackout, the archetypal 'Teddy Boy' (so named after the 'Edwardian' style) emerged to scandalise society. The kids were out of control, and worse still, even a two year stint in the Army didn't make a lot of them settle down, and they became the image of villainy and thuggery in a society which regarded them as totally 'beyond the pale'. To make matters even worse, a new music craze called 'Rock'n'roll' arrived which immediately became identified with these awful people.
Of course, not all of these Teddy Boys were villains, but they and Rock'n'roll were blamed for a lot of society's ills, and this image is still portrayed as something wicked and disrespectful to this day. Fashions come and go, but here in Britain, we are nothing if not conservative, and in the Sixties when Beatlemania was at its height, certain of us still wanted to be 'Teds'. I had my first full drape tailor-made in 1963, although I'd had cheaper 'off-the-peg' ones before that. There were still areas of Britain where it was cool to aspire to this style, and South Wales, and certain parts of the North West of England were such places, and I also recall meeting a couple of Teds from Lambeth (South London) in the mid-Sixties. 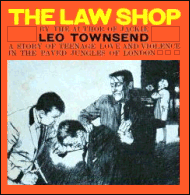 There are three books I'd recommend. For a full background to the threads within Britain's society that created the 'space' where the Teddy Boy would appear, read 'No Mean City' (Alexander McArthur and H. Kingsley Long) , a version of street life in the Thirties. For the Forties version of events, read 'Cut And Run' (Bill McGhee). Both of these books are set in Glasgow. For the Fifties and what London was like, read 'The Law Shop' (Leo Townsend). Some of this is pretty violent stuff, though. Another excellent book with loads of photos that has a slightly different historical 'take' is 'The Teds'.
What has all of this got to do with Rockabilly and Psychobilly? Not a lot, but some people get mixed up, so it's best to set the record straight. This, too, is my 'take' on events. At least I lived through it, and can remember this stuff. I guess that the Rockabilly scene was born of the Teddy Boy scene in the UK in the Seventies, and that in turn led to Psychobilly. Of course, Dave Edmunds, Crazy Cavan, Shakin' Stevens, The Rimshots and Demented Are Go! all come from South Wales....

Recommended CDs - Bonneville - 'Trouble' or '1-2-3-4 Listen to the Teddyboy roar' or Mick Satan & The Rockin' Devils - Teddy Boy anthems or Vernon and The GI's - GI Bop.

To all students who are doing a project or thesis or anyone reproducing this page, please credit us and give us the recognition we deserve.