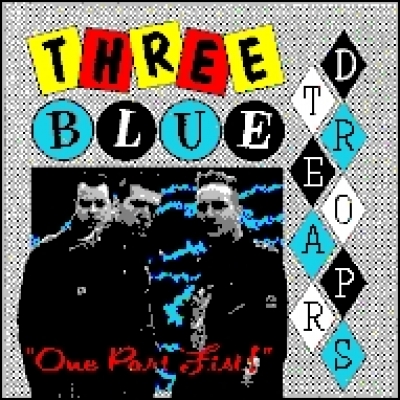 1986 Fairmont: "You just can't say enough about the fourth band, Three Blue Teardrops. They have played every one of the four Rockabilly Rebel Weekends. My totally uneducated impression was that this band played the most complicated music so far today. They lyrics were complicated, the drumming was exhausting to watch, the guitar and bass players were from another world. They were driven. Talented bass player Rick Uppling ended up with black leather gloves on both hands. I'm surprised they didn't need the EMTs. Three Blue Teardrops was the first band forced to do an encore. None of these bands could have had the energy left to do an encore! But they did it. (Yes, the crowd was smaller earlier. Yes, the previous bands were encore material too.) Balling Jack was a super showcase for Rick Uppling. He fused with that bass. I think it was fiberglass. The bands' voices harmonize so you feel you are on a street corner in Brooklyn, long ago. Yet the music is compellingly Now, now and forever."

This is the debut album of Chicago legends 'Three Blue Teardrops' on the infamous Nervous label. The band members have a variety of influences that come together and make one of the best releases ever out of MIDWEST, USA. Modern rockabilly mixed with a swill of psychobilly tonic make this an amazing release. Everything rocks here, and I mean everything. From the violent anthem 'Switchblade Pompadour' to the reality check of 'Rough And Tumble World', Three Blue Teardrops truly kick some ass and take a lot of names. If you don't own this... well you should if you don't! Reviewed by The Psycho Avenger

"Dear Lord! This is one helluva cool band from Chicago, Illinois. Their music is muscular and complex. I don't know how to name this music that they play - it's got elements of rockabilly, gospel, blues... The songs sound very aggressive, but again so goodly and goluptiuos. You can call it 'hard-core rockabilly' or just 'Three Blue Teardrops style', but it actually don't matter how you call it 'cuz this album is so ***king GOOD. And that's all that matters." Lucky Spritzmachine