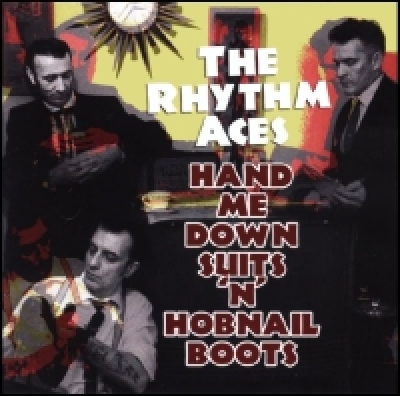 The first album from The Rhythm Aces - HAND ME DOWN SUITS 'N' HOBNAIL BOOTS... great album by the aces, not a duff moment on there (pop music vendors take note of the phrase "all killer - no filler"). Let me start with my favourite song so far COSH BOY - taking on the mantle of John Barry and Vic Flick, its opening features a great creeping bassline (reminded me of Jimmy Smith's descending bassline that opens his track ALL DAY LONG from 1957, or Milt Hinton's bass on the HEAVY SOUL track by Ike Quebec, from 1961) with Pete vamping some excellent twang over the top... Sonically the album sounds a lot like Dave Phillips And The Hot Rod Gang or The Blue Cats - surely the greatest bands who ever lived in my less than humble opinion, and Carl Perkins can rest easy these days knowing his heritage will be carried on for as long as Pete holds a guitar pick!
It's an odd feeling... these men dressed in 50's suits, playing rock and roll authentically, riff for riff. It should feel like a revival of something but it doesn't, somehow it feels like they are living every moment of it in the present day - it never once enters into pastiche, it just sounds like 'real' gritty music that looks better in black+white. They've toured extensively all last year (I get tired just looking at the list), so musically they are as tight as duck's tail (that was my little joke there...).
The lyrics seem to be telling the story of what it was like to be a ted back in the day - and some songs venture into that feeling of being an anachronism in today's supposedly modern world. WHAT'S THE MATTER BABY (WITH THE WORLD TODAY) sums up this feeling best, consciously living in a simpler time, and trying to figure out why it all has to be so complicated these days... I picked a good time to be in the midst of reading Pete Frame's RESTLESS GENERATION book on the 1950's skiffle/jazz/rock'n'roll boom - so I know where they are coming from on this one. But it's not all rose-tinted spectacles - this isn't nostalgia - I've seen the band impress an audience of emo kids to the extent that they wanted to play the music from then on!
Quality never goes out of style, does it?
THE FIRST TEENAGER borrows more than a little from a Hank Mizell track that I've been obsessing over for the last couple of months - they just keep pushing all the right buttons for me... The cover is a surprise - a lot of thought has gone into the artwork and photos, more than just a hasty black+white of the band stood against the wall in a rehearsal room, we get some interesting collage work and iconic imagery (credit to Noz for the design talents - as well as being a more than capable drummer for the band) that expands on the feel of the lyrics. I'M BAD rounds off the album, with the song wailing to a crescendo that just about blows it top, but walks away with a cool swagger instead...
There's more to this album than I've talked about here... it's taking us back to a time when rock'n'roll was still dangerous and your mother warned you against it... real guitars, thumping bass and a swinging drummer - who could ask for more!