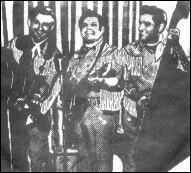 Rare fifties rockabilly recorded by The Raper Brothers (Lee and Paul, both born in Guntown, Mississippi) for the obscure US 'Star-light' label. The Star-light label out of Racine, Wisconsin, was owned by the late Harry Smith, and was later administered by Adolph Salvatori. Both of these tracks were recorded in October 1958. The backup outfit was 'The Silver Spurs'.
The master tapes were lost many years ago, and these two tracks were dubbed off original 45s and cleaned up by Boppin' Bob Jones. On the right you can see a scan of the original label, and on the left, a very old picture of the Raper Brothers from the 1950s.