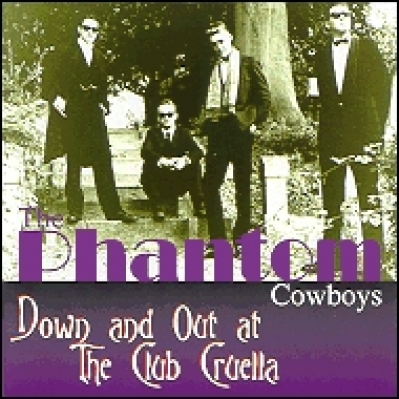 The epoch making 'Surfers in the night' cassette was recorded in 1996 and released the terrible power of Voodoo Jive on the world. The Phantom Cowboys emerged as a force to be reckoned with, critically acclaimed, swathed in black suits and dinner jackets, their hair lovingly coiffeured. The infectious gothic bop allied to ancient Rockabilly rhythms offered a totally new alternative to the legions of tired Elvis impersonators bogging down the Rock'n'roll scene and making it attractive once more to a wider audience.
'Surfers' was followed by 'The Diogenes Club Presents The Phantom Cowboys' in 1997. All three tracks from this cassette were eventually released on 'The Devil's Jukebox' compilation (Bone Tone Corporation: BTCD972) in January 1998. In 1998 The Phantom Cowboys, tired of the reticence of others to put out a release by the band, produced their own CD album, 'Down and out at The Club Cruella' on their own Diogenes Records.

The Phantom Cowboys were formed in Norwich in the early 90's by Lord Emsworth (vocals; lead guitar) Rob (double bass) and The Serpent (drums) and were joined soon after by Megz (Rhythm guitar). The band quickly progressed from being a typical 'school covers band' and began to explore their influences, which spanned musically from 1920's jazz onwards, through 50's rockabilly, to just about any type of music with a sinister or stylish feel to it.
The Phantom Cowboys soon gained attention for their darkly humourous and cleverly written rockabilly-based tunes, as well as for their idiosyncratic look. The band wore Victorian evening dress both on and off stage like latterday 'Vicky Boys', and constantly indulged in macabre jokes in their songs and stage act.