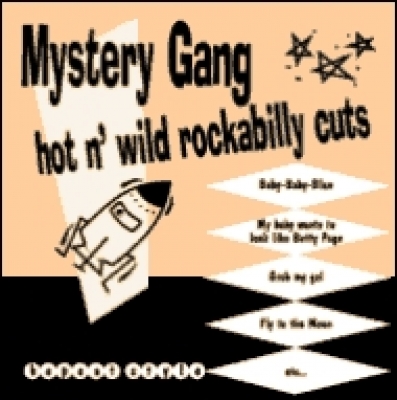 "Some 20 years ago, all rockabilly music came from the United States and Western Europe, even some from Japan, but we had never heard any rockabilly from Eastern Europe. Most likely, there was plenty of rockabilly there too behind the Iron Curtain, it just never reached the west. These things have changed, and all for the best. Bands from Eastern Europe now have an even chance to present themselves to the world, and the world gladly welcomes them, because now we can enjoy even more great rockabilly music!
Mystery Gang hails from Hungary and they started their plaintive quest for recognition in 1998, coming over to Holland, Germany, Austria and France every chance they got. When Zoltan (a.k.a. Les Thunders) wrote me about two years ago to get some attention to Mystery Gang on our website, they already had a few pretty damn good self-penned tracks, which were spread over the internet in MP3 format. Well, we posted their story, Mystery Gang came back to Holland again, and they even issued their first EP 'Fly To The Moon'. Finally, Mystery Gang has found a partner and a fan in Roy Williams of Nervous Records, and recently Mystery Gang released their first full length CD.
Counting fifteen tracks of hot rockabilly, half of 'em self-penned, this platter will surely shake your thing. Starting off with the raving rhythm of the original 'Grab My Gal'. You will notice immediately that English is not the singer's native language, but he pronounces it pretty well. The Eastern European accent gives the sound a nice extra dimension. It's quite clear that this trio enjoys what they're doing and they present their music with great ambiance. The second track is The Teen Kings' 'Ooby Dooby', written by Wade Moore and Dick Penner, a classic performance, followed by Sonny Fisher's 'Rocking Daddy'. Les plucks his upright bass with great verve and Tom Stormy's lead guitar cuts right through you.
Same goes for Carl Perkins' 'Gone, Gone, Gone'. The 5th track is the already legendary 'Fly To The Moon' from the band's first vinyl EP. This track shows clearly that the band can perform and write songs equally well, pretty damn good song. Fats Domino's 'Please Don't Leave Me', played in the Johnny Burnette style, is another classic that fits right in. The next original is titled 'My Baby Wants To Look Like Betty Page' and I was impressed the first time I heard it when Zoltan sent it to me in MP3 format. Great raving rockabilly in the original 50s style. Well, we all want a baby that looks like Betty Page of course...
Roy Brown's 'Good Rockin' Tonight', one of the greatest R&B classics, is played (of course) in the rockabilly style of Elvis, Scotty and Bill and the original 'Jumpin' Around' will surely rock your socks off. As the title implies, it's a great bopper to dance to. The title 'She's Got More Rhythm Than A Ten Piece Band' must have surely come from Gene Vincent's classic 'Red Blue Jeans And A Ponytail', but it's a Mystery Gang original too. The rhythm is somewhat slower, great bopper, and the slap bass is real fat and greasy. Well written lyrics, a very enjoyable rockabilly song. Talking about Gene Vincent, here's 'Five Feet Of Lovin' for you, followed by Buddy Holly's 'Love Me'. 'My Baby's Got An Automobile' and 'Baby-Baby-Blue' are two more self-penned tracks (that adds up to seven) to keep your feet moving. The last well-chosen track of the album is Hank Mizell's 'Jungle Rock' which sounds pretty hot and kinda weird at the same time, due to the singer's edgy accent.
This is one rockabilly collection that proves there is no Berlin Wall or Iron Curtain any more. Hungary rocks just as well as Holland, Finland or the UK. Or maybe they always have..."
Marijn Raaijmakers, BlackCat Rockabilly Europe