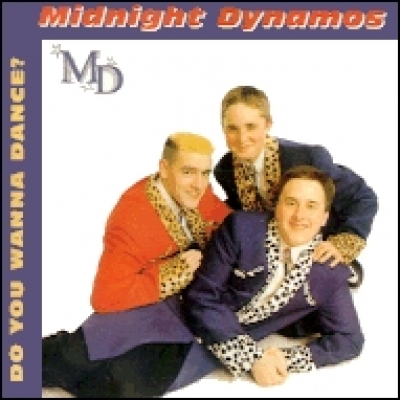 "One of the hardest things to do in the world of Rock'n'roll is to create an individual style. When I first heard The Midnight Dynamos playing live on Del's 'Good Rockin' Tonight' show, I was struck by the distinctively plaintive sound of their singer. Del snapped up their track 'Hayley' for a Fury compilation and it was a monster success on the UK club scene. I decided to make an album with them, and as they were so young and pliable, I thought that I'd offer them some ideas for covers that they might like to try. They picked up on two of my ideas, Lou Reed's 'I love you Suzanne' which they played a lot faster and made into their own style, and Marshall Crenshaw's interpretation of Richard Thompson's 'Valerie', which I feel that they captured brilliantly. Another ingredient in this mixture was the employemt of Ray Cotton of The Jets as producer. I'd known Ray since 1978, and valued his work. The band had some tracks left over from an earlier session, and I was rather worried when their manager/mum Glynne told me that Ricky's voice had broken. Would it still sound the same? Well, yes and no, but the real point was that it still had that plaintive sound that I liked. I'm very happy with the results, and I feel that it is a continuation of a the tradition of good British guitar Rock'n'roll going back to the early days of Cliff and The Shadows, and evokes a time when there were great little-known bands like Lee Diamond and The Cherokees. It's a good mixture of well-known tunes like the title track, odd covers and good originals. If you like that sound, then this CD will sit happily with them on your shelf and in your heart." Roy Williams