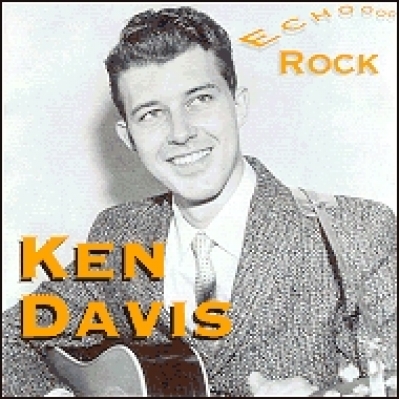 Rockabilly from Ken Davis, the man who made that Rockabilly classic 'Shook shake'. Both of his Starlight 45s are here. 'Shook Shake' and 'Echo Rock' are really cool songs that were recorded at Starlight's 'Garage Studio'. They capture the great raw sound of the late 50's recordings.

Ken Davis learned to sing and accompany himself on guitar/electric bass shortly after his graduation from Racine's William Horlick High School in 1954, incorporating the influences of Johnny Cash, Hank Williams, Buddy Holly and Elvis.
By late 1956, Ken was entertaining at private parties. He eventually added the Honeybees, Judy and Nancy, to the act, along with a lead guitar player. In the fall of 1957 he joined Buddy Nelson's Country Gentlemen as a bass player/singer. The group worked the local tavern scene.
By this time Ken had begun writing a lot of his own songs, so it was only natural that an idea to make a record came into the picture. In early 1958 he and the Honeybees, along with the Country Gentlemen, recorded 'Bundle of Lovin' and 'Sittin' Pretty' at the Pfau recording studio in Milwaukee. The record was released on the Pfau label in March, 1958. The latter song received a lot of airplay on a Milwaukee radio station. The DJ mentioned that if it had been recorded in a more professional studio it could have turned into a possible hit record.
Harry Smith, owner of Racine's Starlight label, liked what he heard - and went on to produce a follow-up, 'Uh Huh, That's right' b/w 'Without Her Love'. Again the Honeybees accompanied Ken on both songs, but the band was put together with Smith's staff musicians. 'Uh Huh' was a popular play on Racine's WRJN, but overall the record was only moderately successful.
Later in 1958, Ken decided to produce the next effort himself. His cousin's boyfriend often used the expression 'shook shake, like a big mix cake'. This is what Ken Davis built his composition around and it turned out to be the most popular song he ever wrote. Putting together his own group of musicians, 'Shook Shake' and 'Echo Rock' were recorded in Starlight's garage studio.'Gone again' and 'Oh so blue' were recorded a little later in 1959.