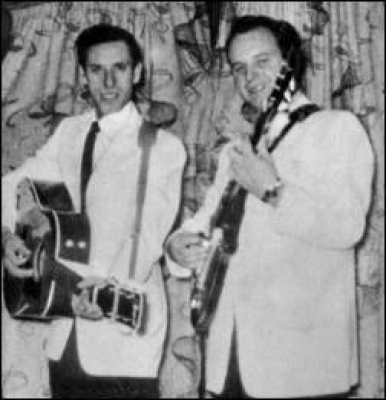 Hank Mizell was adopted by a preacher and named Bill Mizell in Asheville, North Carolina, USA. Hank Mizell was a minor rockabilly artist best known for the 1957 recording of 'Jungle Rock'. He served in the US Navy in 1947, and upon his discharge began both singing and preaching. In the early 50s he and his five-piece country band went to Montgomery, Alabama, to record. A disc jockey there nicknamed him Hank after the recently deceased Hank Williams, and the name stuck. In 1957, working with guitarist Jim Bobo, drummer Bill Collins and pianist Eddie Boyd in Chicago, Hank Mizell recorded 'Jungle Rock' for the local EKO label, owned by Gene Parsons. King Records picked up distribution, but the record did not sell, and Mizell gave up performing professionally. He became a preacher and moved between Chicago, Mississippi and Nashville for the next few years. Although several country singles were recorded in the 60s and 70s, Hank Mizell remained virtually unknown until 1976, when rockabilly collectors in Europe discovered the King single. 'Jungle Rock' transcended cult credibility to reach the UK Top 10 (#2). The picture to the right shows Hank (left) with Jim Bobo(right), and was taken in Chicago in 1957. As part of the Wild Wax Show, Roy Williams was awarded a silver disc by the BPI for 'breaking' the record.
Hank died on 23rd December 1992 in Murfreesboro, Tennessee.

'I'm ready' is a bopper and 'When I'm in your arms' is a real 'old-time' hillbilly slowie with steel guitar and fiddles.