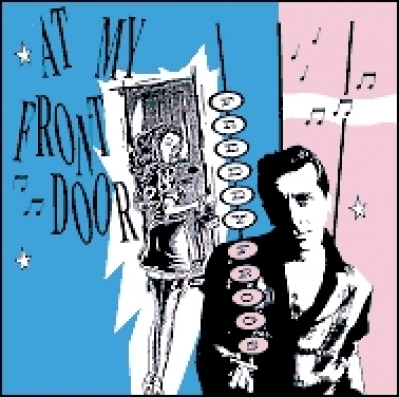 One-time Nervous LP (NERD013), this is a sort of 'big-production' Rock'n'roll album.

"The late Seventies was the last time I felt the need to return to my musical roots and make some noise. I was lucky to have had Wayne Vulcan's Songshop in NYC. I was even luckier to have had the BMT's (a punky rock-a-billy band) and the Ribitones (a doo-wop group) to play with me.
These tracks were originally issued as an LP ('At My Front Door') on Off the Wall Records. The single 'Crazy Litle Mama' hit the charts in England on Hertford Records (an affiliate of Radio Luxembourg) and was subsequently released in ten countries on four different labels.
Live, the BMT's played every Sunday at the legendary Max's Kansas City in its last year, and were joined by the likes of Johnny Thunders and Levi Dexter.
When the BMT's and I parted company, I formed a new band with Jim Kelly called No Frills. This record reflects my time with these two bands. About half the tracks were recorded with the BMT's and the other half with No Frills. This Off the Wall LP was licensed to Nervous Records for distribution in Europe."