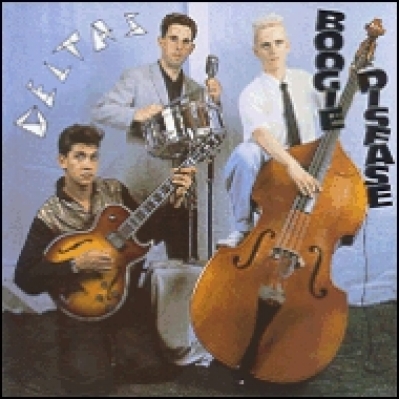 The Deltas - wild rockabilly blues from London. This band was one of the WILDEST acts in the early Eighties. The Deltas were a sort of 'psycho-blues-rockabilly' outfit. Hear the passion on Steve Bongo's vocals, thrill to the slap of Little John's dog-house bass and tremble to the twang and boom of Captain Marvel's guitar! This was recorded at the height of their powers....

"What we have here is raw, uncompromising home grown rockabilly, performed with an economy of style that borders, at times, on the inept ........ you begin to realise that a combination of enthusiasm and interesting material are at the nub of the matter, then appearance (real gone cats) and finally, on stage, unbridled frenzy, all combining to justify the whole. If you like it rough'n'ready, this is grist for your mill." Tony Martin 1981

"Rumored to be one of the wildest bands of the early 80's, The Deltas play their own unique brand of Rockabilly with a hint of blues influence. 'Boogie Disease' was recorded in the height and prime of The Deltas reign over the early 80's Rockabilly Scene. The Deltas are still gigging and playing around. Rumor even has it some new studio stuff might be in the works. Let's hope so! This is a definite classic and early release by one of the best Rockabilly bands to show its face in the 1980's! 16 great tracks along with Nervous Records' great packaging make this a MUST addition to anyone's collection!" Reviewed by The Psycho Avenger 2002