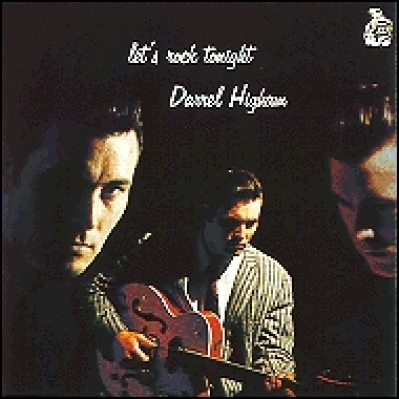 Darrel Higham's been rather prolific, to say the least! This were his first two albums from 1994/1995 shortly after the demise of Bob and The Bearcats. Mobile Corrosion is a bit more 'country' than a lot of his other stuff. Eddie Cochran fans will love 'Rockin' band blues'. The other musicians are Rusti Steel (lap steel), Les Curtis (drums), Mick Wigfall (bass) and Dave Brown (piano).

"Born on the 5th January 1970 in Bedford, England, Darrel Higham is widely regarded as one of the most talented and original artists to have emerged from the British rock'n'roll scene in many years.
Darrel Higham is a third generation rocker. He wasn't even a twinkle in his daddy's eye in the 50's, and was little more than an impressionable teenager during the rockabilly revival of the 70's and early 80's. At the age of 13, however, he began playing guitar emulating the music of his heroes of the day; Shakin' Stevens, The Jets and The Stray Cats. Soon he became musically quite proficient and by the time he was 17 was playing lead guitar with bands like The Baskervilles and The Offbeats.
Alongside his collection of Brian Setzer and Shakin' Stevens records, however, sat re-issued recordings by the original greats of Rock'n'Roll like Elvis, Gene and Eddie Cochran. He was greatly impressed, not only with the inimitable vocal prowess of these legends but also with the guitar styling of their now equally legendary lead guitarists; Scotty Moore and Cliff Gallup.
Eddie was somewhat outstanding in Darrel Higham's eyes, however, in that not only did he have a unique voice, but played his own tremendous lead guitar. On some of his hits, he even played all the instruments making use of overdubs years before anyone else in Rock'n'Roll! This impressed Darrel more than anything and he soon became a multi instrumentalist himself.
He played slap-bass with Rusti Steel and The Tin Tax backing such rockabilly legends as Terry Noland, Merrill E. Moore and the late Johnny Carrol. Switching back to lead guitar, he formed the highly successful Bob and The Bearcats in 1991 with vocalist Bob Butfoy.
During all this time, however, Darrel Higham had been perfecting both Eddie Cochran's vocal and guitar styles... so much so, that on some of his recordings like 'Hallelujah I Love Her So', you can barely tell the difference between the 'student' and 'master'. So much so, indeed, that he spent six months during 1992 in America as lead vocalist and guitarist with Eddie's original band, The Kelly Four at the request of their leader and pianist, Jim Stivers. It was only the untimely death of Jim Stivers that brought Darrel Higham back to our shores. Don't get me wrong, however... you will not be seeing Darrel Higham as an Eddie Cochran soundalike on 'Stars In Their Eyes'. He is his own man and can play to perfection almost any style of Rock'n'Roll." Steve Aynsley, 1995