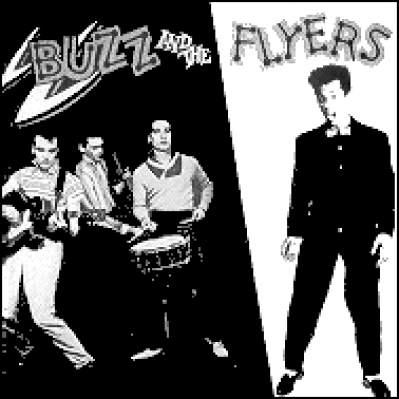 All Buzz & The Flyers' recordings are here! The first three tracks originally appeared on Sylvan Sylvain's (New York Dolls) 'Sing Sing' label, and capture what Rockabilly is all about - sparse drumming, twangy guitar and Buzz Wayne's distinctive voice curling around the lyrics. Yeah! The next few tracks were recorded in England for Mickey Most, and the rest were all recorded in New York, some produced by Richard Gottherer (of 'Blondie' fame). This is one of the finest examples of American Neo-rockabilly I have ever heard, from the band that stopped the show at the Caistor Weekender - now replaced by Hemsby (a feat that has NEVER been matched....). I've seen and heard a LOT of bands, but few came close to what Buzz And The Flyers sounded and looked like.... Roy Williams

"This three-song EP was originally issued in 1980 but I just happened to track it down. This is New York rockabilly from the late seventies fronted by legendary rockabilly vocalist Buzz Wayne. Actually the real gem in this band was the guitarist, Michael Gene, who combined a number of styles ranging from Scotty Moore to Chuck Berry and incorporated jazz guitar. 'Little pig' is the A-side that captures an up-tempo swinging and boppin' feel with a chorus that will have you kicking up your heels. This cut is very reminiscent of the early Carl Perkins 'Honey don't' kind of style. The B-side begins with a Buzz And The Flyers original 'You Crazy Gal You' in the same vein as the A-side. The last cut of the record is Jack Earls' 'Let's bop' that is straightforward rock'n'roll revved up similar to the classic 'Black Slacks'. These three songs are also found on the Buzz And The Flyers full length LP. This is some real underrated classic rock'n'roll, so if you haven't already tracked it down, it's a must." Eric Svirda, Seattle WA, USA